These years, the DIY PC market seems to be smaller and smaller.
The main reasons are Notebook popularized and Netbook, Apple iPad launched.
Most users just use computer for internet surfing or email.
However, the internet topic of how to build a DIY PC is still very popular so far.
Many users will search info by budget or needs to build own DIY PC.

There are many friends ask me how to build the DIY PC.
I think there are 2 kinds of mainstream PC.
One is all in one MB, which built-in GPU. The price is lower and budget is around 11000~13000NTD, 365~431USD.
The other one is discrete with graphic card for 3D online game.
The price is still the key concern. We just pick the entry model. The budget is around 14000~16000NTD, 465~531USD.
However, in my personal idea, I still recommend to add more budgets.
Some hardware like VGA or HDD, you can enhance performance and spec for just pay more few hundred NTD.
Also, you can use this PC longer.

For this kind of article, I hope I can share every year.
Last share is early 2010, Intel annual best buy Micro ATX PC with Core i3-530 boxed cooler OC guide.
Recent 2 years, AMD more emphasize in fair price.
The low price multi-core CPU strategy is more and more acceptable for end users.
This time, I set the budget at 15500NTD, around 515USD, to build a high C/P value PC for your reference.

DRAM
DDR3 price keeps dropping. There are more and more 4GB DDR3 kit in the market.
If you have more budgets and may need 64-bit OS in the future, 4GBX2 is the better choice currently.
I use CORSAIR DDR3 1600 4GBX2, dual channel. The price is a little higher.
CORSAIR is a well known international brand and passed the dual channel stability test. The price is still acceptable.
The price is around 125USD.

Audio is Realtek ALC892, supports 7.1 channel and Dolby Home Theater surrounding technology.
The same chipset series, there is also one more model, 880GM-UD2H. The SB is SB710 and no SATA3 and USB3.
This model price is around 600NTD, 20USD, lower than 880GMA. If you have limited budget for MB, you also can consider this.

The above components are not must.
If you don’t need such high performance, you can choose cheaper products. On the other hand, you can buy more high end one.
Base on your demand, budget and favorite brand, you can choose whatever you want. It’s the most fun for DIY PC.

X4 640 default frequency is 3.0GHz already, so it’s capable for most applications.
Even for the file converting performance is also good due to the quad core multi-tasking.
The original cooler is around 1670rmp under BIOS control. The acoustic is very low.
If it’s in full speed, it’s 3260rpm which is louder in bare system. The noise is acceptable inside the chassis.

The standby temperature is very low. This number is satisfied.
The full speed is 62 degree C and it’s too high for bare system.
X4 640 original cooler is too slim. It may cause the temperature too high. 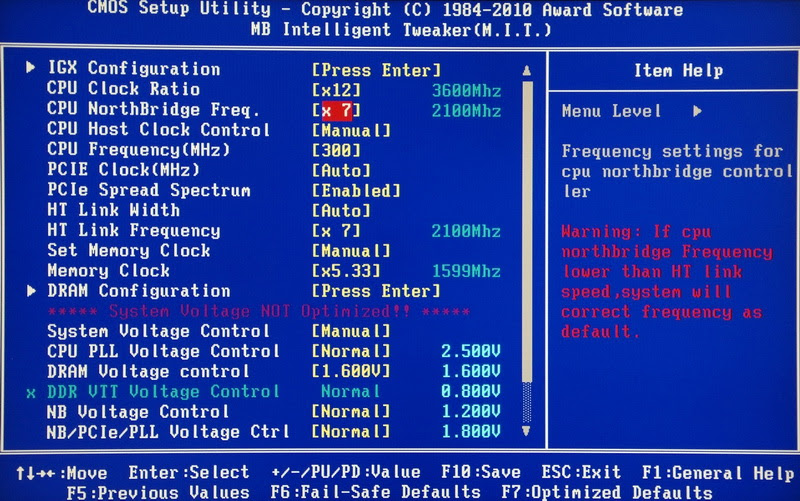 CPU Unlock can enable X2/X3 CPU to X4 by chance.
CPU Core Control is more detail features. If X2 cannot enable to X4 stable, you have one more option to enable to X3.

Previously, as my experience of using 785G, 790GX or 890GX, the AMD CPU can OC to 300MHz mostly.
For the BIOS setup and DRAM multiplier, you have to pay more attention for these setup, then you can join AMD 300MHz club.

AMD started to build in Memory Controller into CPU since K8.
During that time, it really created the better bandwidth and memory clock, However, years passed, the Core i series performance has over it.
The CORSAIR DDR3 quality is very good. The official spec is 1.400V for DDR3 1600 CL9.
I set as DDR3 1600 CL7 8-7-24 high performance parameter. It just needs 1.600V to pass all benchmark software.

X4 640 default clock is 3.0GHz. After OC to 3.6GHz, some benchmark improves 20%.
Windows Experience Index doesn’t improve much.
Or we can say, since the index over 7, the score cannot improve much dues to the highest score is 7.9.
PCMark Vantage is a multi-factors benchmark software, the performance improvement is not much.
For original cooler, long time run at 3.6~3.75GHz can be stable.

As thermal meter, the standby and full speed temperature after OC is around 2~4 degree C comparing to default.
After OC, the temperature is a little higher than default. Maybe it’s AMD 45nm characteristic?!

When OC the ATI Radeon HD 4250 clock from 560 to 830MHz, the 3D benchmark software improve around 30%.
880G is capable for general 3D application or games. If you need to run some professional 3D application, you better to add a grapgic card.


During the test, the pity is the revision C3 X4 CPU cannot enable L3 Cache.
Even though as my experience, the L3 Cache doesn’t improve performance much.
However, enableL3 Cache is for personal feeling. This is the main difference between C2 and C3.
Of course, C3 also has some strength. As per the internet, C3 has better memory compatibility. It’s helpful for DDR3 OC range.
As per my experience, the same voltage, C3 OC range is around 100~200MHz to C2.

AMD strategy is focus on mid-low market for years. You can see in this segment, CPU and chipset price are lower.
For the mid-end to hi-end market, the performance is lower than Core i and DDR3 performance is also lower.
I do hope AMD K10 structure ca improve this issue. However, so far AMD is still focus on multi-core and higher C/P value.

After buying Case and DVD writer, you can build your own PC. The budget is around 15500NTD.
If you have any preferences of price, performance or brand, you can adjust your budget.
If the 3D performance is not enough in the future, you just need to spend 2000~ 3000NTD for graphic card upgrade.
This DIY PC could be the mid-high performance and mid-low price choice.

After sharing AMD 2010 mainstream platform, I will share Intel platform asap.
Due to the year end, the Intel mainstream platform will be done near year end or early 2011.
Wish you keep supporting my original review article. Thanks :)
張貼者： WIND3C - windwithme風大 於 12/17/2010 01:20:00 下午 1 則留言:

I still remember Intel launched new platform in November 2008. It started the Core i7 Age.
This platform is LGA1366, and CPU is Core i7 series. The chipset is X58+ICH10R.
Half years later, Intel announced LGA 1156 platform and CPU has Core i3, i5 and i7 which is wider product range.
For LGA 1366 market position is not big impact compare to P55.

Inside the box, there are CPU, original copper-bottom cooler, manual and Intel sticker.

Light blue and white colors design. The overall components and design are good.

i7-950 spec is over 3GHz already. When user enable Turbo Boost, the clock can pull to 3.2~3.3GHz.
i7-950 can get very good scores in most common benchmark software. The CPU performance has achieved high end segment.
Also, DRAM can OC to DDR3 1866 without pulling CPU frequency and combine exclusive 3-channel technology, the overall performance can be enhanced more.

GTX460 is mid-end VGA market, and its performance is quite well in the above games.
OC version clock is 715MHz which is higher than normal GTX460.
3DMark Vantage is also over 17000. LOST PLANET 2, need very high 3D performance, is over 37 pages as well.

Besides CPU, DDR3 quality, voltage is also important for OC.
You can see the X58A-UD3R setup pages above, QPI/Vtt Voltage is important for pulling high clock.
CPU operates at 200/2000 stable will need 1.45~1.55V.
The voltage setup is the key factor for OC X58 chipset. 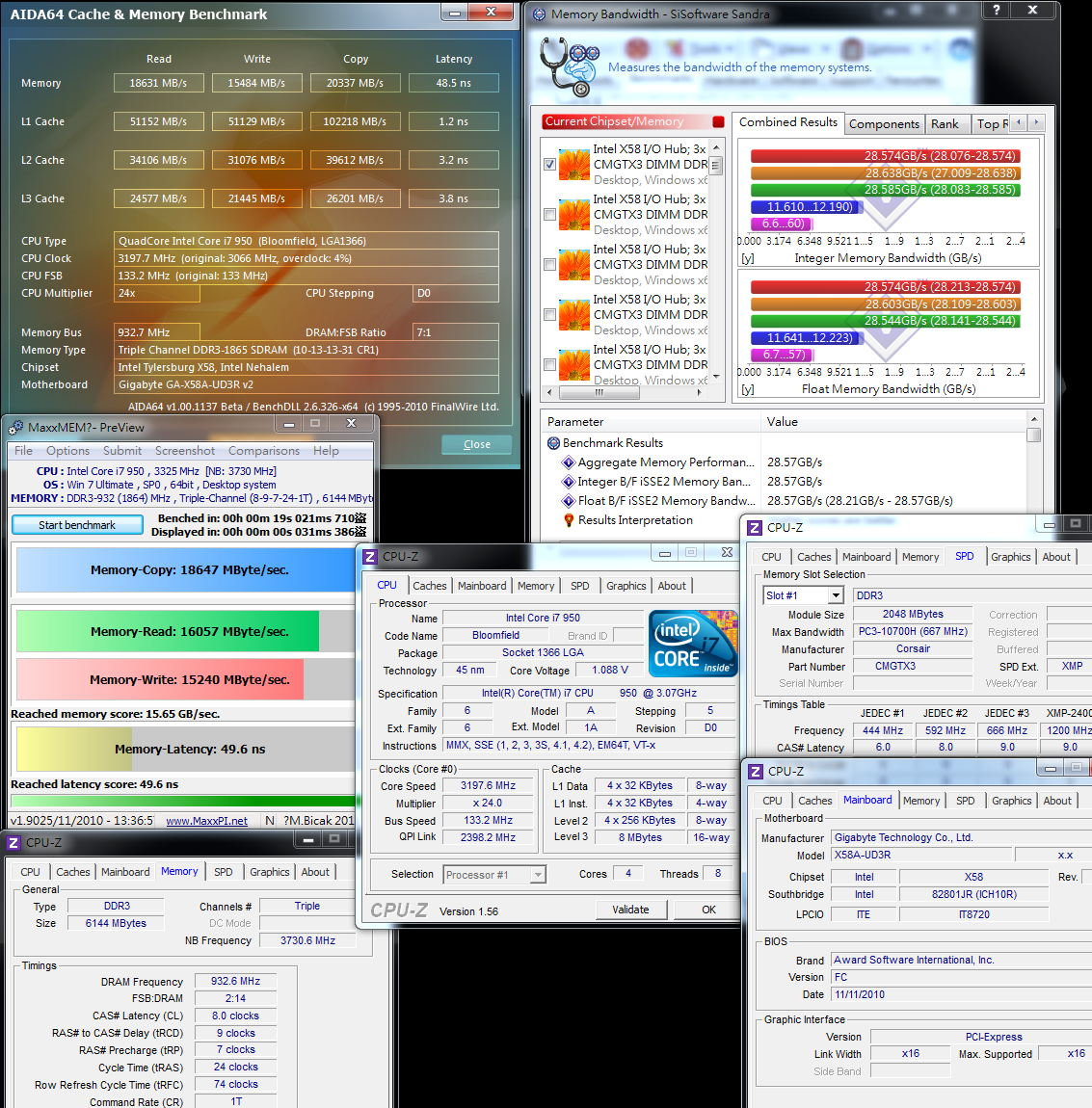 LGA 1366 platform is the only platform supports 3-channel technology. The DDR3 bandwidth is extremely high.
Especially, when OC to DDR3 2000, the performance is almost double.
DDR3 performance increased is the key strength for Intel phase in Core i7.

After i7-950 OC to 4GHz, you can compare the detail performance difference.
The performance increases over 20% in most benchmark software.
There is only Windows Experience Index is almost the same.
It’s due to Windows Experience Index is the estimate system performance. It doesn’t test too detail items.
This system get 7.7 of 7.9 is very high score already.
I used to test several better quality Core i7, most need 1.30~1.392V to OC to 4.2GHz. Just for your reference.

LGA 1366 is long life product in Intel platform.
Since Nov 2008 launched, Intel will launch new LGA2011 chipset in 2011 Q4.
This part is not same as LGA 1156 users which need to upgrade soon.
In multi-core performance, 980X and 990X can provide upgradeable higher performance.
Although I know the price is high, but it’s still better than no 32nm 6C12T CPU can choose.

Last thing about X58 product line is X58 having wide product range in the market due to every vendor launched many models in past 2 years.
The most entry X58 chipset MB is same as X58A-UD3R around 250USD.
Compare to the other same price range P55 products, even the entry X58 products spec is still better than P55.
This is windwithme 15th LGA 1366 review in past 2 years. I hope it can be your reference data before purchasing. :)
張貼者： WIND3C - windwithme風大 於 12/16/2010 11:38:00 上午 沒有留言: