The Radeon HD 5XX0 series is the latest generation of all ATI’s product lines,
the main features of which are using more 3D technology and more advanced process of the chips.
Plus, the product roadmaps of ATI and AMD are quite similar.
The products are all built either with higher C/P rates or with variety of choices for users to make the purchase by their budget easily.
There are several kinds of product lines on the PC market: 5900 / 5800 / 5700 / 5600 / 5500 / 5400,
which brought ATI new series VGA card a very good comment from the market.

I once shared an article about ATI Radeon HD “4670” at the end of 2008,
and it turned out that based on the C/P rate, the model was very popular on the market.
We can see that from the pricing and position of the product, the new generation ATI Radeon “5570” looks like the previous one “4670”,
and also seems “5570” is going to take over the lower cost level of VGA from “4670”.
The particulars of the “5570” are including supporting updated Direct X 11, ATI Eyefinity multi-screen technology and ATI Stream technology.

First, let’s take a look at the externals of ATI Radeon HD 5570, which is built with a smaller short-card design,
means which can be modified with low-profile short bracket, then put into smaller size PC to increase the 3D performance,
although one D-Sub connector could be missing.

From the rear, we can see that there is a metal bracket to hold the heat-spreader on the front side by 4 screws on the rear.

Built-in GDDR3, there are total 8 pcs. of Samsung memory chips on the both sides of the PCB. Frequency is 900Mhz, means it should be DDR3 / 1800.
The total capacity is 1024MB, it should be enough to support most of the usage in any kinds of conditions.

The heat-spreader is so quite during the operation, no noises, copper made looks very pretty.

From the left side, we can see all components “5570” is using, and also with the very dense circuit design.
ATI has a very good standard in using the materials & components from the generic PCB design.
Since AND & ATI were combined several years ago, we can find AMD brand name on ATI products nowadays.

We can see the ATI “5570” chipset is MADE IN TAIWAN after we removed the heat-spreader.

The heat-spreader is designed with a large copper base to use for heat spreading, and the quality of the thermal paste also looks very good.

In the early stage, the ASROCK 890GX main board is one of the few models which can break out from the limitation of supporting multi-core CPU of the AMD SB850.

CPU is designed with V8 + 2 Phase, supports the highest 140W CPU which makes the stability of the entire system much better.

The Radeon HD 5570 has good testing results with the games above, which operates very smoothly even if using the 1920 X 1200 screen resolution.
But if users adjust the 3D effects too high, that might cause a little bit lag in some games,
by this situation, users might need some higher grade VGA cards to work it out.
For the lower-cost level VGA Card, the performance of “5570” is quite well among the 3D effects.

The ambient temperature is at 33 degree, no mater with over clocking or with default settings,
the standby temperature shows stable, and it just increases 3 degree when over clocked.
So it should have some help a lot by using 40nm process chipsets to control the thermal for “5570”

The last, it is the one of the hottest 3D games at the moment - StarCraft II : Wings of Liberty

Even we keep the StarCraft II resolution at 1920 X 1200, there is still 30/fps smooth performance,
we recommended not to adjust the 3D effects too high, otherwise it might cause a little bit lag during the game.
But in the high resolution with StarCrafe II, which can still be qualified with the high loading of StarCraft II,
that means the 3D performance of “5570” is still higher than standard.

E7 version of be quiet! Straight Power series is the latest version launched by BQT.
The models from earlier E7 version are 480W, 580W and 680W.
These 3 models are all cable management (CM version) power supplies and surely their prices are a bit higher because of the relatively costly CM design.

Straight Power also has its non-CM version in the market, including 500 and 600W. In terms of selling prices in the market,
their prices are surely a few hundred bucks lower than that of E7 CM version.
The focus of new E7 version launched this time is on 80+ Bronze Certification and the SilentWings FDB fan integrated.
This new series not only is compliant to Rev. 5.0 of Energy Star and the power consumption needed in standby mode is less than 0.5W.
As for its cosmetic part, the point lies in its brand new style.
The case used this time is quite different from be quiet! typical image in our mind. We’ll introduce more of the case in the following section.

The titanium gray coating used this time makes this E7 version quite different from the black case we normally see in be quiet! power supply cases.

The honeycomb ventilation holes in the back side, commonly seen design.
Active PFC, 110~240Vac

The symmetric fan guard is in Jazz-Black. Just like what I’ve said before, it looks really like BBQ grill. However, it still looks quite stylish.
12cm FDB Fan: MTBF/300K hrs, 17dBA

3 rows of honeycomb ventilation holes right beside cables, quite helpful in enhancing the heat ventilation mechanism.

M/B: ASROCK X58 Extreme3, which is the most advanced PC platform among Intel platforms.

What listed above is the spec of the platform used in the performance review.
In order to demonstrate the power consumption happens during the test, the consumption will be measured by “Power Angle”.

The data obtained through Power Angle is only for reference due to its lack of extreme accuracy.
GTX 260 SLI is used for the review in order to reach the utmost 3D efficiency.
Also, while at full loading, the CPU could reach power consumption as high as up to 811W;
though it was only charged by 110V, still it has reached a level much higher than 600W loading.

CPU Voltage Fluctuation
While it’s in standby mode, the voltage stays at around 1.38V, and while the CPU is running at full speed, it stays between 1.36~1.37V.
The voltage fluctuation range of CPU is majorly dominated by the voltage features of M/B.

According to the test data released in 80Plus website (at 115V):
The power conversion efficiency of E7 600W is 83.01% and in 80Plus website,
it shows that the actual power converted from 720.20W is 597.86W.
During my test, the peak wattage, 811W, was converted into an effective power of 673.21W (at least 12% higher than the nominal wattage, 600W).
The fluctuation rates of Straight Power E7 600W respectively at 3.3V and 12V are both around 1.9%, making it quite a good performance.
12Vstarts to fluctuate violently after OCCT starts to run at full speed. The fluctuation rate is roughly around 6.12%.
In overloading situation, 12V fluctuated bigger.

The items here are measured by a more accurate meter.
In standby mode:
5V is measured at 5.06V, higher than the 4.99V measured by the M/B. 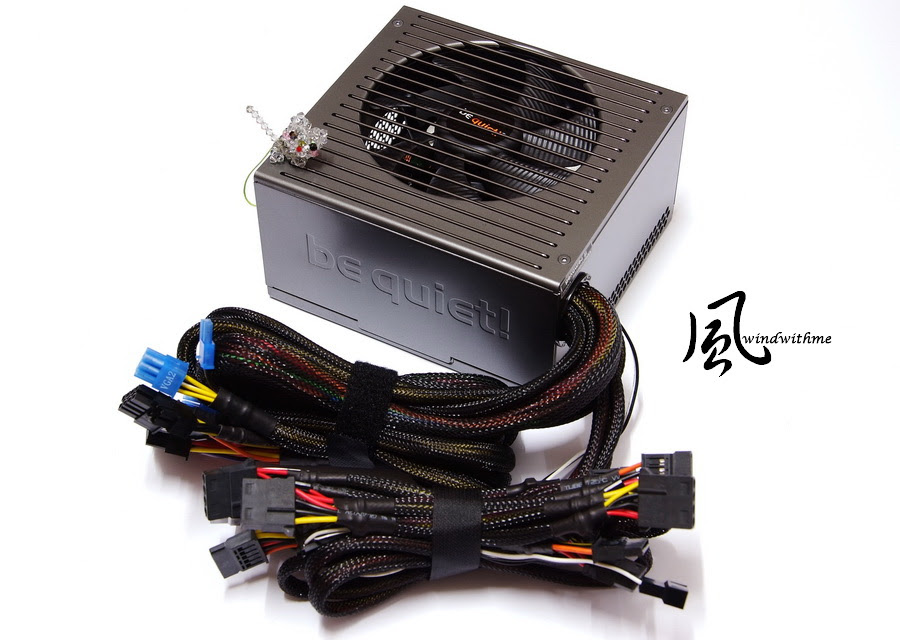 You could still find the advantages of new E7 version in the non-CM series of Straight Power,
such as the honeycomb ventilation holes on both sides, sharp case edges removed to better protect the safety of users.
Of course, the long MTBF and low-noise level of the exclusive SilentWings FDB fan integrated also serve as great advantages

Actually, I haven’t conducted any tests for the part of the wattage higher than it’s nominal spec.
This time, I happened to have a platform capable of running at full loading (over 800W) and it allowed me a great chance to compare the difference.
When the loading was around 770W~810W,
the rpm and CFM of the fan were both increased without making obvious noise and the body temperature of the Power Supply was around 60 Celsius.
In terms of these two aspects, I think you can say the PSU is quite excellent.
In terms of voltage fluctuation, relatively, the fluctuation is much less in 3.3V and 5V.
Though the fluctuation of 12V is a bit higher, after being measured by a meter,
the fluctuation ratio is actually only 2.2%, making itself quite a great point/performance in a 600W PSU loaded a lot above 600W.

The end user price of be quiet! Straight Power E7 600W in the market is around 3,990 NTD, roughly equal to $124 USD.
E7 600W (non-CM version) is around 500NTD lower than E7 580W (CM version) launched to the market earlier.
The two models of new E7 non-CM version (500W & 600W) are capable of increasing the C/P value of E7 version.
So, if an end user is taking non-CM power supply into their consideration while making a purchase,
Straight Power E7 might be quite a good alternative since its C/P value is relatively quite high. : )